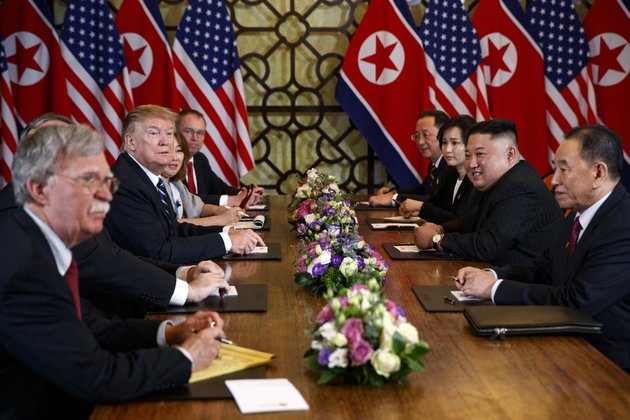 SEOUL - North Korea says it may be willing to discuss "denuclearization" with the United States if unspecified "threats and hurdles" to its security and development are addressed.

The comments Monday by North Korea's Foreign Ministry come days ahead of what U.S. officials hope is the start of long-delayed working level nuclear talks with Pyongyang.

North Korea's Vice Foreign Minister Choe Son Hui a week ago said the North was willing to hold "comprehensive discussions" with U.S. officials by the end of the month.

In a statement carried Monday by the Korean Central News Agency, North Korea's Foreign Ministry appeared to move back the date of the possible talks, mentioning they are "expected to be held in a few weeks."

"The discussion of denuclearization may be possible when threats and hurdles endangering our system security and obstructing our development are clearly removed beyond all doubt," the statement said.

The comments, attributed to the director general of the North Korean Foreign Ministry's Department of U.S. Affairs, called the upcoming talks "decisive."

"Whether the DPRK-U.S. negotiations will be a window for chance or an occasion to precipitate crisis is entirely up to the U.S.," the statement said, using an abbreviation for North Korea's official name.

North Korea has called for the U.S. to come to the table with a "new way of calculation," giving an end-of-year deadline after which it may increase provocations.

Talks between the U.S. and North Korea broke down after a February summit between Kim Jong Un and Donald Trump ended without a deal. Kim demanded a relaxation of sanctions in exchange for partial steps to dismantle his nuclear program. Trump wanted a more far-reaching deal.

Some North Korean officials have since hinted Pyongyang is also interested in receiving unspecified security guarantees from the United States - a comment in line with North Korea's latest statement.

"It seems to confirm that security guarantees will be a top priority for North Korea in the upcoming talks," says Rachel Minyoung Lee, an analyst with NK News. "North Korea has hinted since late July that it would try to include security issues in denuclearization talks by highlighting U.S.-South Korean joint drills as a national security threat."

Just what security guarantees North Korea may demand are not clear. But North Korea has repeatedly stated it has no intention of unilaterally giving up its nuclear weapons without U.S. concessions. At times, North Korean officials have called for the U.S. to remove any nuclear threat, not only from the Korean Peninsula but also the wider region.

"At a minimum, Pyongyang will attempt to further scale down on or even terminate U.S.-South Korean joint military drills," she says. "And North Korea won't get another opportunity like this, as Trump himself has repeatedly expressed disdain for these military exercises."

Trump and Kim have met three times - most recently in late June at the demilitarized zone separating the two Koreas, where they agreed to start working-level talks that have never come to fruition.

At their first meeting in Singapore in June 2018, Trump and Kim signed a short statement agreeing to "work toward complete denuclearization of the Korean Peninsula." But the two sides never agreed on what denuclearization means or how to begin working toward it.

Trump has recently hinted he is open to a fourth meeting with Kim, though it isn't clear when and where such a meeting would take place.

South Korea's Joongang Daily reported Monday that Kim recently invited Trump to a summit in Pyongyang, the North Korean capital. The story, which cited anonymous sources, said the invitation came in a letter from Kim.

South Korea's presidential office and foreign ministry both said Monday they could not confirm the existence of such a letter, but stressed Seoul's continued support for the resumption of talks as soon as possible.

If talks do begin soon, Kim could enter the negotiations with fresh leverage in the form of newly tested weapons, a perception of crumbling U.S. alliances, and the departure of a senior U.S. official Pyongyang has long reviled.

After having refrained from ballistic missile launches for 18 months, North Korea has conducted 10 rounds of short-range missile tests since early May. Trump has shrugged off the tests, saying he has no problem with short-range launches. Many within range of the short-range missiles do not share that assessment.

North Korea, which has long tried to divide the U.S. from its allies in the region, may also be pleased with the worsening dispute between South Korea and Japan.

After Japan imposed a series of trade restrictions on South Korea, Seoul announced last month it would withdraw from a military sharing deal with Tokyo - a move U.S. officials say will complicate efforts to respond to challenges like North Korea.

The move threatened to further strain the U.S. alliance with South Korea, which had already been challenged by Trump's demand that Seoul pay substantially more for the cost of the U.S. troop presence.

Another factor is the departure of White House National Security Advisor John Bolton, who has long taken a hawkish view on North Korea. Trump says he disagreed with Bolton on several issues, including North Korea.