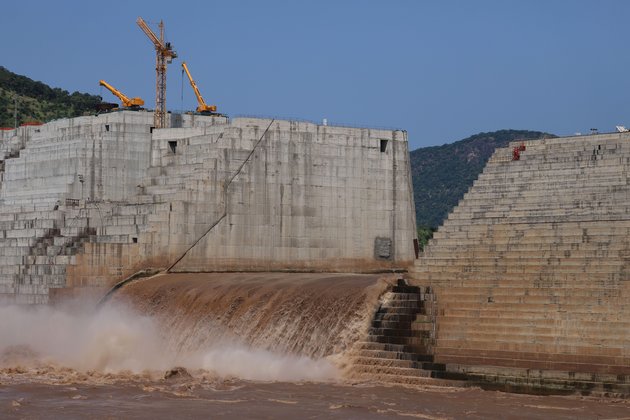 Ethiopia is condemning an Egyptian proposal for water allocation amid tense negotiations over the countries' use of Nile River waters.

In an Oct. 5 statement, the Ethiopian government called Egypt's conditions for filling the massive reservoir of the Grand Ethiopian Renaissance Dam "unjustified" and disruptive to "the positive spirit of cooperation."

The countries disagree about how to divert water from the Nile. Ethiopia's proposal calls for the reservoir to be filled over four to seven years, a slower pace than the two-to-three-year time span the country says it could pursue.

But on Aug. 1, Egypt submitted a counterproposal that would require Ethiopia to receive approval at various points, a step Egypt said is necessary to avoid droughts.

Ethiopia rejected the conditions, saying they reflect colonial-era laws that don't account for the rights of upriver countries.

"Meeting this demand is tantamount for Ethiopia to agreeing to make the filling of the GERD (Grand Ethiopian Renaissance Dam) subject to Egypt's approval at any stage," Ethiopia's Foreign Ministry said in a diplomatic note published by Reuters.

In a statement to Parliament on Wednesday, Egypt's foreign minister warned Ethiopia not to proceed without agreement from all parties.

"Ethiopia's moving forward with the operation and filling of the Renaissance Dam is unacceptable and a clear violation of the Declaration of Principles, and will have negative consequences for stability in the region," Egyptian Foreign Minister Sameh Shoukry told Parliament, according to Reuters.

"We call on the international community to shoulder its responsibility in finding a solution that satisfies all parties," Shoukry added.

The $4 billion Grand Ethiopian Renaissance Dam is one of the largest infrastructure projects ever undertaken in Africa. Ethiopia hopes to complete it by 2022 and believes it could produce 6,000 megawatts of electricity, some of which could be exported.

But Egypt and Sudan have worried about the dam's impact on water flow. Egypt relies on the Nile for 90% of its water needs.

In 2015, the countries agreed to a "Declaration of Principles," laying the groundwork for negotiations.

Observers say the recent tensions are a setback but believe the countries can still find a path forward.

"We are certainly seeing a rapid escalation and rhetoric from the Egyptian side. So, it definitely signals a departure and strategy on the part of the Egyptians to try to alter the course of negotiations," said Joseph Siegle, director of research at the Africa Center for Strategic Studies.

"I don't think you can rule out the prospect of a military conflict, but I think that's unlikely," he told VOA. "(Egyptian) President (Abdel Fattah) el-Sisi has acknowledged at an earlier time that this issue isn't something that can be solved through military activity, and all sides have committed at earlier times to try to resolve the differences through negotiations."

'Enough water for everyone'

William Davison, the International Crisis Group's senior analyst for Ethiopia, said Egypt is concerned the dam could be the first of several upstream projects on the Nile. But he believes the river can benefit all countries in the region, if projects are properly managed.

"We know a compromise is achievable. And I think that's wrapped up in the larger concern Egypt has that we should all remember - that it's not just a technical compromise on GERD ... but it's also a massive compromise involving all Nile basin countries," Davison told VOA.

"Yes, there might be trade-offs," Davison said, "but there's certainly enough water there for everyone."

Davison added that it is in Egypt's best interest to come to an agreement soon, because, he said, Ethiopia is moving ahead with the project and will not be deterred.

"Time is essentially running out - primarily for Egypt, because Egypt is the country that has the most to lose, if a compromise isn't reached," Davison said. "Egypt has the most at risk here."