Inside the Numbers: The Jets' 7 QB 'Aces,' All in Passing 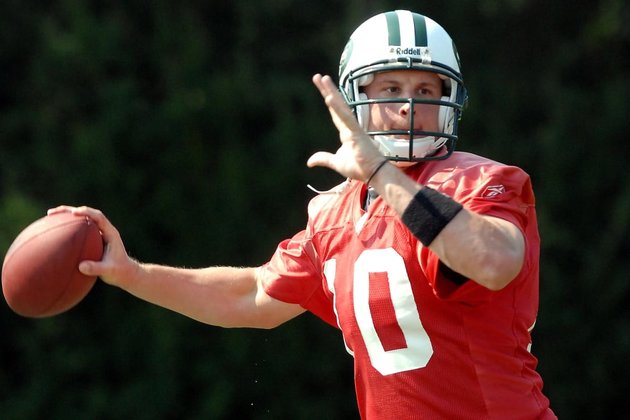 From Namath to Wilson: How Rd. 1 Picks Threw in Their College Careers Before Joining the Green & White Randy Lange

For this week's Inside the Numbers, we're taking a stroll down memory lane with a comparison of first-round draft pick Zach Wilson's passing statistics at Brigham Young, for his last year and for his career, with the passing lines of the other six quarterbacks taken in Round 1 in franchise history - not their pro stats but their numbers in their college programs before coming to the Jets.

On the surface, Wilson's career stacks up very favorably to those of Joe Namath, Richard Todd, Ken O'Brien, Chad Pennington, Mark Sanchez and Sam Darnold. That could be because Wilson is the uber passer of the group ... or because his best BYU season last year wasn't pounded down by any Power Five defenses due to COVID-19 ... or because college QBs and offenses have evolved from Namath's reign in the stodgy Sixties to Wilson's time in the wide-openTwenties.

Here is how Zach's 2020 season and his Cougars career numbers shaped up (*Rate is rating from the NCAA's passing efficiency formula, which computes similar to but generally much higher than the NFL's passer rating formula):

Starting with Namath (2nd overall, 1965 AFL Draft) and Todd (6th, 1976 NFL Draft), it almost appears that a single season's worth of passing metrics have been misprinted over their career stats lines. That's because Namath played in 'Bama's run-heavy pro set (not to mention that he was suspended two games in '63 and missed time due to knee injuries in '64), while Todd was a part of the Tide's Wishbone era in the Seventies.

Here are Namath's numbers, bearing in mind that the popular career stats for Namath, Todd, O'Brien and Pennington don't include bowl or playoff games, so we've added them in here:

And here are Todd's numbers, including three bowl games. He threw it half as much as Namath but ran it not quite twice as much (304 times for 4.1 yards/carry compared to Namath's 192 carries for 3.0, although both ran for 16 TDs):

The stats for O'Brien (24th overall, 1983) were a little harder to track down, since they were from Division II UC Davis in the early Eighties, not to mention his one season at Sacramento State in the late Seventies. But here they are, including his two playoff games in 1982:

Pennington (18th, 2000) at Marshall had the most prolific numbers, in part because he was the Jets' only Round 1 QB to play four full college varsity seasons and in part because he played in three Division I-AA playoff games in '95, then three Motor City Bowls from 1997-99:

Sanchez (5th, 2009), played very little for Southern Cal as a redshirt freshman in 2006, then a little more the next year before taking the reins for his only full season at the Trojans' helm in '08:

Finally, Darnold (3rd, 2018) tweaked the Sanchez script, redshirting in 2015 before starting fulltime for USC for most of '16 and all of '17, then leaving as a 20-year-old after his redshirt sophomore season to join the Jets:

And what does it mean? We hope it means Wilson's the best of the bunch. But determining that ... call us back in a few years.