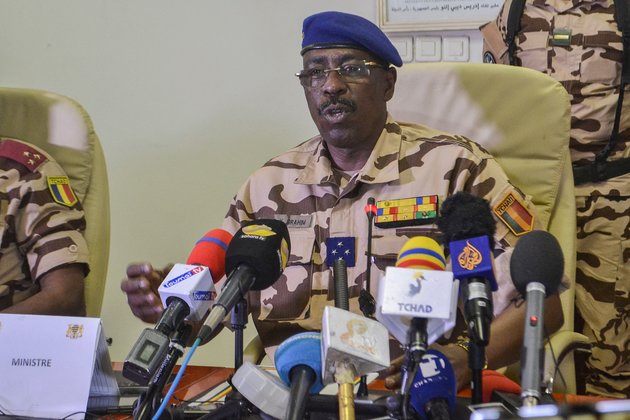 YAOUNDE, CAMEROON - Envoys from Chad's ruling military council are seeking support from its central African neighbors in fighting rebels who they say endanger a smooth return to civilian rule. Chad's delegation told Cameroon's president that without peace, a transition to civilian rule will be impossible, but Chad's opposition says the military rulers should immediately step down if they genuinely want peace to be restored.

Abdelkerim said Cameroon is one of the five central African states Chad's military council asked him to visit and give an account of the situation since Deby died April 20, 2021.

Abdelkerim said Chad has been witnessing a series of protests and deadly rebel attacks that are threatening its unity since Deby died. He said Chad's military council has sent him to all member states of the Central African Economic and Monetary Community to explain plans the military leaders have for a smooth transition to civilian rule. He said Chad needs the assistance of its neighbors for peace to return.

When asked, Abdelkerim declined to comment on the type of assistance his country needs. He said, however, security will be threatened in the region and that threat will spill over to all central African states, should the situation in Chad remain fragile.

A rebel force known as the Front for Change and Concord in Chad (FACT) has been involved in bloody battles with Chadian troops on the central African state's northern borders with Libya, Niger and Sudan. Chad said several hundred troops, rebels and civilians have been killed within a month.

FILE - People drive past a Chad army tank near the presidential palace, as fighters from the rebel Front for Change and Concord in Chad (FACT) appeared to be moving toward the capital, according to the U.S., in N'djamena, Chad, April 19, 2021.

Chad under Deby was a key ally of France in the fight against jihadist groups across West Africa, including Boko Haram. These terror groups and other jihadist militants have over the years destabilized parts of Chad, Cameroon, Nigeria and Niger.

Joseph Vincent Ntuda Ebode, a lecturer in international security and defense at the University of Yaounde-Soa, said Chad's envoys are visiting central African nations to lobby for the kind of support the former president of Chad had from his neighbors all through his 30 years rule.

He said Chad's late president Deby and Cameroon President Paul Biya signed an agreement to assist each other in maintaining security in both countries and in providing support against attacks. He said Chad's military council wants to maintain the agreement signed between Cameroon and Chad. He said the terms of the agreement between the countries are clear: An attack on Chad is synonymous with an attack on Cameroon and vice versa.

Marsa Success, a Chadian opposition leader of the Transformers Movement, said although there are serious threats to stability, civilians do not want Chad's constitution violated. He said the military council is not showing signs of wanting to hand over power to a civilian rule.

Marsa said the charter presented to Chadians by the military council states that the military rulers can renew their mandate of 18 months if insecurity persists. He said a national dialogue should be convened and a civilian designated to lead the transitional period while the military carries out its duty of maintaining peace.

Marsa said any civilian chosen to lead the transition should not be a candidate at the presidential election. He said Cameroon, Gabon, the Central African Republic, Equatorial Guinea and Congo-Brazzaville, should help bring peace by advising Chad's military to hand power to civilians.

Currently, Chad's transitional military council is headed by Idriss Deby's 37-year-old son, Mahamat Idriss Deby. Mahamat was named interim head of state by the council after his father who spent more than three decades in power, and was one of Africa's longest-serving leaders, was killed fighting rebels at the age of 68.

Mahamat promised to hold elections within 18 months, but the opposition and rebels dismissed the takeover as a coup and said the military must relinquish power to a civilian-led government.

Thousands were the streets to protest military rule. The demonstrators said they do not support what they called a "Deby monarchy."

The rebel group FACT has vowed to depose the transitional military council should it fail to hand over power to civilian rule.