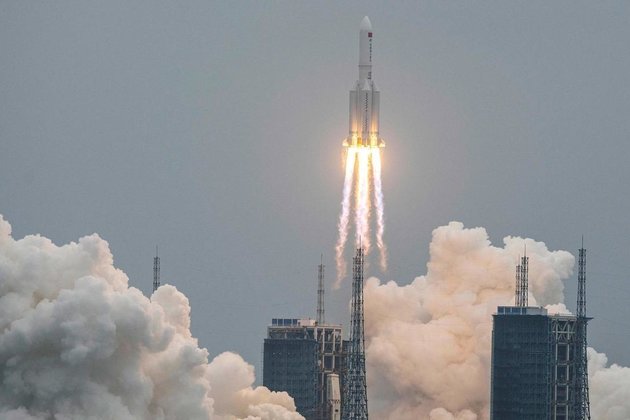 Debris from parts of China's Long March 5B rocket is set to crash down to Earth this weekend - but space agencies do not know when or where.

The debris is set to return to the Earth's atmosphere sometime on May 8 or May 9. The Pentagon expects it to land at around 11pm GMT on Saturday but is allowing for a nine-hour margin of error either side.

Space agencies around the world are anxiously following the rocket's uncontrolled descent. The White House said on Wednesday that NASA was doing everything it could to track the remains of the rocket.

The Long March 5B took off last April to install the first part of a Chinese space station that is under construction. The parts of this rocket that are now plummeting to Earth have been orbiting the planet at more than 27,000 kilometres per hour.

It is one of the largest forms of space debris to return to Earth - about 30 metres long and weighing more than 20 tonnes. The debris trail could land as far north as New York, Madrid or Beijing and as far south as the New Zealand capital Wellington, Harvard-based astrophysicist Jonathan McDowell told Reuters this week.

Debris from another Long March rocket landed on some buildings in the Ivory Coast in 2020, causing damage but no injuries or deaths.

US Defence Secretary Lloyd Austin said on Thursday that the US military had no plans to shoot down the oncoming debris. "We have the capability to do a lot of things, but we don't have a plan to shoot it down," he told journalists.

Hopefully, he said, the rocket will land "in a place where it won't harm anyone [... in] the ocean, or someplace like that".

China has said that the risks are minimal because most of the rocket components will probably be destroyed upon re-entry. "The probability of causing harm [...] on the ground is extremely low," Chinese foreign ministry spokesman Wang Wenbin told journalists on Friday.

Many experts agree that most of the debris will probably be destroyed by the friction as it enters the Earth's atmosphere at high speed.

"The most likely event will see any debris surviving the intense heat of re-entry falling into the oceans or uninhabited areas," specialist publication Space News wrote. Nevertheless, "the risk remains of damage to people or property".

Given the sheer size of the rocket fragments, some experts say there is a significant risk that a sizeable chunk could fall to Earth instead of burning up in the atmosphere. "A rough rule of thumb" suggests that "between 20% and 40% of the dry mass can survive", Holger Krag, head of the European Space Agency's space debris department, told The Guardian.

This would be enough to cause major damage if it landed on an inhabited area. At present, the most likely place for it to land is in a long band around the equator - encompassing the east coast of Africa to the west coast of South America, the Pacific and Indian oceans as well as a chunk of northern Australia - according to Aerospace Corp, a California-based NGO that advises the US government on space matters.

It is difficult to calculate precisely where it will land because the speed at which it is moving means that the slightest error in calculating its point of entry into the atmosphere could lead to a difference of tens of thousands of kilometres.

>> You can track the debris' trajectory here.

All this could have been avoided by redesigning the rocket. In the 1970s, US and Soviet rockets of a similar size to this first stage of the Long March 5B went crashing down to earth - but now the technology has advanced to such a point that space agencies can design the central part of their rocket in such a way that it doesn't end up orbiting around earth.

Abandoned spacecraft tend to be set adrift far from the Earth's atmosphere or orbiting another mass such as the moon. Remote controls on rocket engines can allow people on Earth to manage their descent so that they land in the ocean, far from inhabited areas. These kinds of operations often ensure that it lands in the vast seas of the South Pacific, between New Zealand and South America.

"What's bad is that it's really negligent on China's part. Things more than ten tonnes we don't let them fall out of the sky uncontrolled deliberately," astrophysicist McDowell told The Guardian.

This problem is likely to get worse as a growing number of non-state actors get involved in space exploration; more and more countries and private companies are sending up satellites and rockets, leaving space debris in their wake. There are currently more than 9,000 tonnes of space debris in orbit - without any accurate maps of where it is headed.

This article was translated from the original in French.