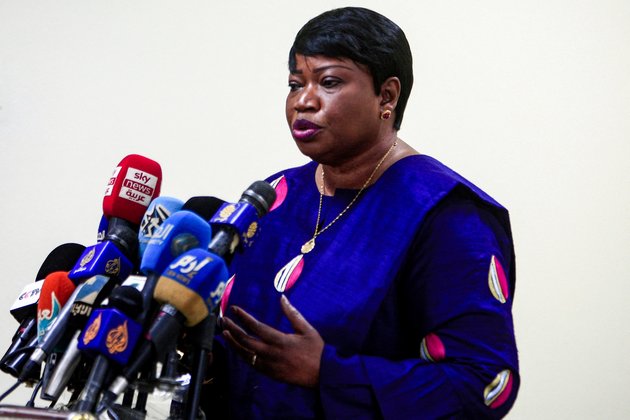 NEW YORK - The departing prosecutor of the International Criminal Court has called on Sudan's government to transfer four men wanted for war crimes in Darfur to The Hague.

"Sudan has to tangibly demonstrate that the new Sudan is now a fully fledged member of the international community that has joined the fight against impunity and is fully committed to justice and the rule of law," Fatou Bensouda said Wednesday during her final briefing to the U.N. Security Council as the court's chief prosecutor.

"Almost all the suspects are in the custody of the government of Sudan, and there is no legal impediment to their surrender to the ICC."

Only one Darfur war crimes suspect is in ICC custody. Ali Kushayb, whose given name is Ali Muhammad Ali Abd-Al-Rahman, surrendered voluntarily and was transferred to the ICC a year ago.

The arrest warrant for the former Janjaweed militia commander includes 22 counts of crimes against humanity and 28 counts of war crimes, allegedly committed in 2003 and 2004 in Sudan's Darfur region. He is suspected of planning and, in some cases, participating in attacks against civilians.

The yearslong conflict between Darfur rebels and the Khartoum government killed more than 300,000 people and displaced 2 million more, causing a humanitarian crisis that is still felt today.

Bensouda just returned from her first trip to Darfur.

"My historic visit to Darfur last week opened my eyes even more to the reality of what we and the people of Darfur have been fighting for over the years," she told the council.

She said that another suspect, former Sudanese Interior Minister Ahmad Harun, who is at large, reportedly wants to surrender to the court, and that there is an "urgent need" to transfer him to The Hague soon.

Harun is charged with many of the same crimes as Kushayb. Their cases were separated because one is in the court's custody and the other is not. Bensouda said there is still time to rejoin their cases, which would be more efficient and allow witnesses to testify only once about traumatic events.

"Sudan is under a legal obligation to surrender the suspects pursuant to Resolution 1593," she said of the Security Council resolution that first referred the situation in Darfur to the ICC more than 16 years ago.

Bensouda said last year's Juba Peace Agreement between Sudan's government and various rebel groups also states that war crimes suspects must appear before the ICC, and that Sudan should fully cooperate with the ICC's investigations and prosecutions of these suspects.

The other three outstanding warrants are for former President Omar al-Bashir, who has been in a Khartoum jail since he was ousted during a popular revolution in 2019; Abdallah Banda, former commander of the rebel group Justice and Equality Movement; and former Sudanese Defense Minister Abdel Raheem Muhammad Hussein.

Last August, Sudan's prime minister, Abdalla Hamdok, said the transitional government was ready to cooperate with the court. But so far, it has not handed over any of the suspects. His representative at the Security Council said Wednesday that ending impunity remains a top priority.

"Last week, the prime minister announced that the government 'is working with the ICC and victim groups to find the best ways to bring wanted suspects to justice before the ICC,' " the representative said, quoting Hamdok.

Prosecutor Bensouda leaves the court this month after nearly 20 years, nine of them as the top prosecutor. Her tenure has not always been smooth.

In 2016, African countries threatened a potential exodus from the court over complaints that it disproportionately targeted Africans. They eventually backed down. And in 2019, the Trump administration revoked Bensouda's U.S. visa and, the following year, sanctioned her and a colleague over investigations into U.S. troops in Afghanistan.

The Biden administration lifted those sanctions in early April, and at Wednesday's meeting, its envoy expressed support for the prosecutor's work. The U.S. is not a member of the ICC.

"The United States fully supports the ICC's investigations in Darfur," Ambassador Jeffrey DeLaurentis said. "We call on the civilian-led transitional government to honor its obligations under the Juba Peace Agreement and U.N. Security Council Resolution 1593 to cooperate with the ICC.

"In that regard, the United States has taken - and will continue to take - active steps to encourage the civilian-led transitional government to immediately transfer Ahmed Harun to the court."

On June 16, Bensouda, a native of Gambia, will be succeeded at the ICC by British human rights lawyer Karim Khan.