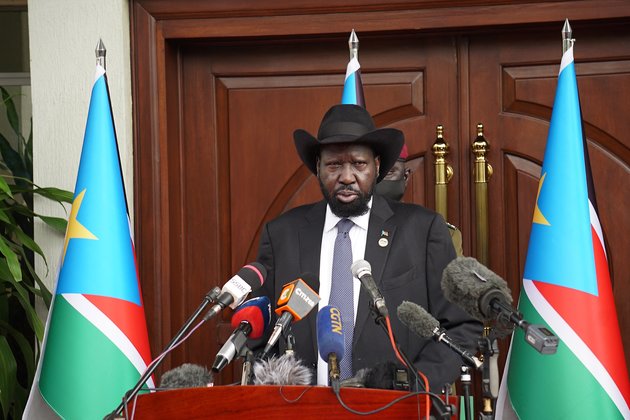 JUBA , SOUTH SUDAN - Family members of South Sudanese journalist Alfred Angasi Dominic say they are relieved the National Security Service released him from detention but are worried about his declining health.

Security agents detained Dominic for more than two weeks after he allegedly declined to report news about recent presidential decrees on the South Sudan Broadcasting Corporation.

Dominic, a news anchor at the government-owned broadcasting network, was arrested July 4 and released on Saturday. He was diagnosed with tuberculosis months ago.

Cecilia Edward Dominic told VOA's South Sudan in Focus her brother was arrested because he refused to read the reports on President Salva Kiir's decrees, something she called an administrative issue.

She said Dominic's condition worsened because he was not able to take his medicine while in detention in Juba.

"There was a recommendation from a doctor that Alfred should not stay in a cold place, dusty places and there are specific foods that he should not eat. But in prison you don't have a choice you must do anything. His health is not good and he is even complaining of general body pain. We asked him if he has been tortured but he said that he has not been tortured inside the prison," Dominic told VOA.

The South Sudan Union of Journalists, the South Sudan Media Authority, and the Association for Media Development in South Sudan all expressed concern over Dominic's detention.

The journalist's release may serve as a learning experience to journalists across the country, said Patrick Oyet, chairperson of the South Sudan Union of Journalists.

"We hope that moving forward we will have better cooperation with the authority and better working relationships between journalists and the authorities. We have been informed he was not feeling well before the arrest, actually he was on medication and due [to] the arrest there was a gap in the medication because he didn't take his medicine with him," Oyet told South Sudan in Focus.

Oyet said union members have been visiting Alfred to check on his condition.

Josephine Achiro, secretary-general of the Association for Media Development in South Sudan, condemned Dominic's detention and blames administrators with the South Sudan Broadcasting Corporation for allowing Dominic to be detained over an issue which was supposed to be resolved within SSBC management.

She called on media outlets to protect their journalists.

"We condemn this in very strong terms and this should not repeat itself. National security or all the authorities in this country, they should understand those journalists are not there representing themselves. They are there representing the voice of the voiceless. SSBC is a government-owned media house and if they can take in their own son, what did they want us to understand? This is really very bad," Achiro told South Sudan in Focus.

South Sudan National Security Service spokesperson John Kumuri told South Sudan in Focus he was not aware of any journalist being detained by national security agents.

"Up to now I have no information that the national security has detained a journalist but I will find out and get back to you. My department didn't receive such information from the leadership but as soon I consult together with the other message, I will get back to all media houses," Kumuri told VOA.

Based on Dominic's salary as a government employee he may not be able to afford proper medical care for treatment of his condition. Government workers have not been paid on a regular basis for several months. Achiro is urging Dominic's colleagues and other organizations that deal in trauma to help Dominic recover from this experience.