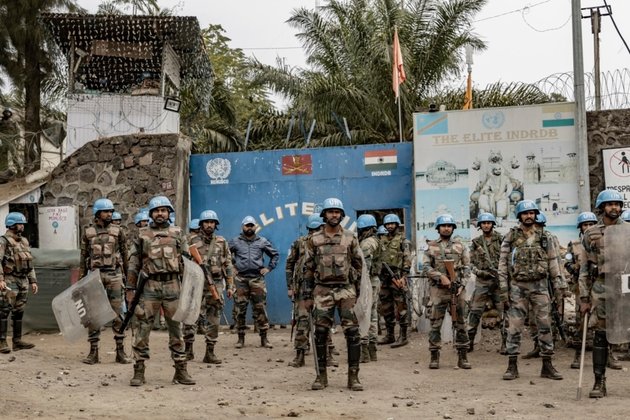 Nairobi, Kenya - The U.N. peacekeeping mission in the Democratic Republic of Congo has arrested U.N. peacekeeping troops suspected of having opened fire on a Ugandan border post, killing at least two people and injuring 15 others. It's the latest violent incident involving the U.N.'s mission to the DRC, which has been facing violent protests.

In a statement, the U.N. mission at the Congo-Uganda border at Kasindi said the soldiers from a MONUSCO intervention brigade force were returning from leave when they opened fire on the border post.

The Sunday incident took place in DRC as the troops crossed from Uganda back into Congo.

The special representative of the secretary of general of the U.N. in Congo Bintou Keita described the incident as unspeakable and irresponsible behavior and said the soldiers opened fire for "unexplained reasons." Keita said the U.N. had contacted the soldiers' countries of origin so that legal proceedings can be initiated against the perpetrators.

DRC authorities said among those injured during the incident were two policemen who were working at the barrier and eight civilians.

Congolese government spokesman Patrick Muyaya said the peacekeepers involved in the incident will be suspended from Congo pending the outcome of plans to withdraw the entire MONUSCO force from DRC. 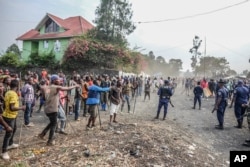 Demonstrators clash with police during a protest against the United Nations peacekeeping force MONUSCO deployed in the Democratic Republic of the Congo, in Sake, some 24 kilometers west of Goma, July 27, 2022.

Nearly 20 people have been killed in eastern Congo since protests began on July 25.

The protestors who stormed the U.N. base in Goma accuse the mission of failing to achieve peace since they began operations in Congo 20 years ago.

The mission in Goma Monday paid tribute to four of its members who were killed during the anti-MONUSCO protest in North Kivu. In a tweet MONUSCO said the ceremony took place in the presence of the leadership of the mission and the head of the U.N.'s department of peace operations.